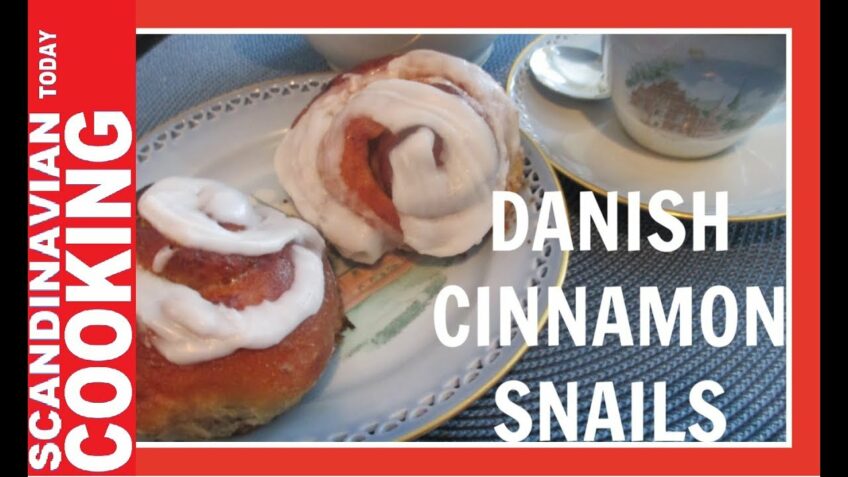 How To Make Delicious Danish Cinnamon Snails 😋 Kanelsnegle Opskrift
Why the Danish cinnamon buns (Kanelsnegle)? If you think of cinnamon rolls suddenly you’re a child again. Memories of coming home from school and smelling cinnamon buns baking in the oven. The cinnamon bun is the pastry of warm thoughts!

Enjoy the Danish Cinnamon Snails and coffee with your friends and family at your home. It is a great excuse to get a chance to catch up and have a hyggeligt (cozy) afternoon.

Here we show you how to step by step make the Danish Cinnamon Snails from scratch and without using an electric mixer. See our recipe below.

Danish Cinnamon Snails Ingredients 😋 Kanelsnegle Opskrift:
a cup of milk
one teaspoon of salt
a quarter cup of sugar
two eggs
a teaspoon of cardamom
a teaspoon of cinnamon
a teaspoon of ginger
one package of dry, active dry yeast
three-and-a-half to four cups of the flour
eight tablespoons of butter
six tablespoons

Instruction:
1) Heat milk over the stove. Add salt and sugar
2) Pour warm milk mixture into a big bowl. Add 2 eggs. Mix it up a little bit in the bowl. Add cardamom, cinnamon, & ginger. Mix in the spices. Add one package of dry, active dry yeast.
3) Work in 3 1/2 cups of flour into the milk mixture. Add a little bit of flour at a time and mix it. Set aside an extra 1/2 cup of flour. Add butter. Add more flour into the mixture. Continue mixing with a wooden spoon.
4) Pour batter onto the table. Transfer the dough to a floured surface. If it’s very sticky, mix in more flour. Knead until smooth. Knead until smooth. Cover the bowl.
5) Add 1 cup of butter into a pot over a stove. Add 3/4 cup of brown sugar. Add 2 tablespoons of cinnamon. Cream together the butter, spices, and sugar.
6)Transfer the dough to a floured surface.
7)Roll into a rectangle no more than 1/2 inch thick. Divide the dough in half if you want different fillings. Spread each rectangle with half the filling.
8) Starting with the edge closest to you, roll the dough up. This forms a long log. Pinch the dough so it sticks together. Cut the log into 1 inch-
thick slices. Place the rolls on the prepared baking sheet.
9) Brush on water, egg, sugar mixture over the rolls. Let the rolls rest for one hour before baking.
10) Bake rolls at 425 F for 10 minutes or until golden brown.
11) Let the snails cool a little before frosting it.

Recipe by Karen Grete & Heidi (mother/daughter team).
– Tell us which cinnamon snail pic was YOUR favorite!
– Give this video a thumbs up